RYA Sailability ‘Sailor of the Year’ 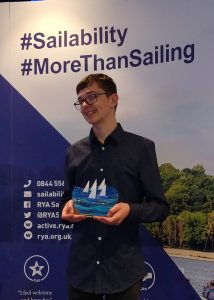 A delighted Ben with his award.

Our son Ben has now been on 3 trips with The Island Trust with his school, Woodeaton Manor. He was featured in The Island Trust’s autumn newsletter telling how he has joined Oxford Sailability and had taken part in his first regatta. Ben’s sailing story continues and last weekend reached a new height. A couple of months ago we were told that Ben had been shortlisted for an RYA Sailability award and we were invited to the annual national awards dinner. We attended the dinner on Saturday 15th February and much to his amazement and delight Ben was named RYA Sailability ‘Sailor of the Year’.

There is also a write up of the conference and awards on the RYA website which says how Ben’s love of sailing came from a trip with The Island Trust.

Since his first trip in June 2018, Ben has certainly come a long way. He is looking forward to a trip on Moosk in July, this time on a teenage sailing week and not with his school. Ben will then have sailed with The Island Trust on Johanna Lucretia, Pegasus, Tectona and Moosk!